Brief accounts of a handful of films from the SIFF’s second week as it rolls into its third.

The Big Road (Sun Yu, 1935) – Something like an amalgam of Our Daily Bread and Mrs. Miniver for the Anti-Japanese War, by which I mean it’s a propaganda film celebrating first the communal virtues of collectivist rural life (the hard work of uniting the nation through literal road-building) and then the bold heroism of that collective as it stands against Imperialist aggression, in the form of the traitorous land-owning, but not land-working, class (relics of Old China, these rulers wear 19th Century clothes, and live in Qing mansions, the feudal system in opposition to the power of the Modern Industrial Worker). It ambles, plotless for most of its length, but it’s accumulated enough power that by the end, as its hero (eight characters combine to form one hero, a communist Voltron) is smashed to bits by advanced machines of war, it resembles nothing less than “Guernica” in its devastation. 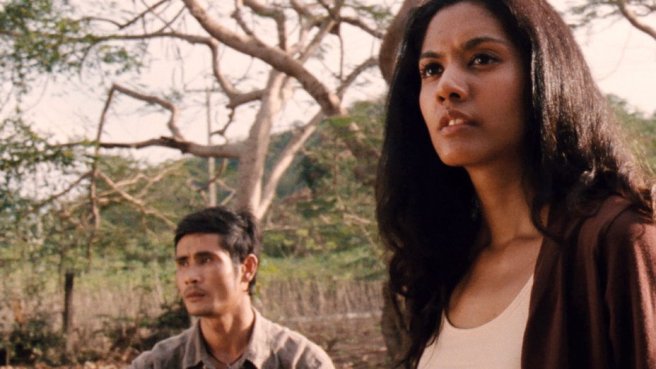 The Island Funeral (Pimpaka Towira, 2015) – Thai director Pimpaka Towira’s first narrative feature since 2003’s One Night Husband comes perilously close to being something special. A slow cinema road trip movie with a young woman, her brother and their friend driving from Bangkok to the wilderness to visit her long-lost aunt, the film has the kind of moody uneasiness that distinguishes the best works in this once-fashionable international style. The spell is broken with flashes of armed soldiers, news reports of a society in the grips of a military coup and a possibly imagined image from hell. As the trip continues, the lost urbanites increasingly fall under the control of mysterious strangers who may or may not be leading them where they want to go, culminating in a midnight boat ride along a jungle river that might as well be the Heart of Darkness itself. And then, and then it all ends so mundanely, so prosaically, so thematically direct, like Jauja turned into an Alex Gibney movie.

Heaven Can Wait (Ernst Lubitsch, 1943) – That thing where Ernst Lubistch and Samson Raphelson make you laugh hysterically for 90 minutes and then rip your heart out. I will never read anyone complaining about spoilers again without picturing Eugene Pallette bellowing about not wanting to be told how the Captain got out of the barrel. 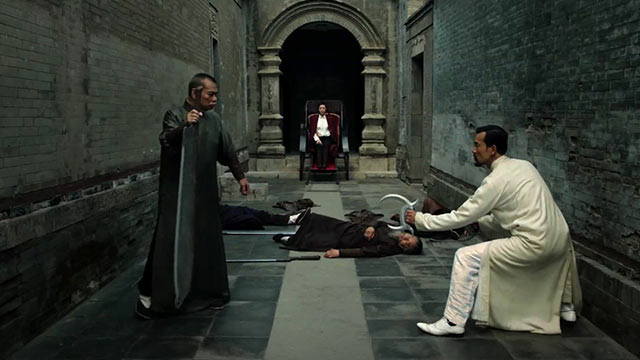 The Final Master (Xu Haofeng, 2015) – A dour myth of kung fu in the years before the Japanese war. Director Xu Haofeng excises most of what’s interesting in such tales in favor of a less-complicated-than-it-seems plot about a city’s martial arts schools governed by arbitrary and pointless rules, vague intimations of the historical period (the Japanese are never mentioned, neither are the Communists or Nationalists named) and moody stares masquerading as romanticism. Xu’s claim to fame is the script for Wong Kar-wai’s The Grandmaster, which this film resembles greatly in plot, subject and time period but not at all in any other (that is to say, any meaningful) respect. It’s made all the more unpalatable by the bland sameness of the action, usually (but not exclusively) cut just enough that we get a feel for the athletic prowess of the performers, displaying a rarely seen on screen variation on Wing Chun armed with long knives, but are denied any actual pleasure in seeing them work. But at least no one will leave the theatre without knowing the movie was set in Tianjin, a city which apparently has nine rivers.

My Beloved Bodyguard (Sammo Hung, 2016) – Sammo Hung’s long-awaited return to the director’s chair (known as “The Bodyguard” here in the US and “My Beloved Bodyguard” everywhere else), his first since 1997’s Once Upon a Time in China in America, finds the now 64 year old star playing a recently retired security agent drifting sadly into dementia in a small town near the Russian border. After a stirring credit sequence chronicling the training of the formidable bodyguards that make up the Central Security Bureau, including a Gumpish composite phone of Sammo himself guarding Richard Nixon during the later’s visit to China, and a animated prologue narrating Sammo’s tragic backstory (he lost his granddaughter while babysitting), the film settles into a gentle rhythm, broken only by the adorable cuteness of the little neighbor girl who pals around with Sammo and her gambling degenerate father, played by Andy Lau. The film’s first major action sequence follows Lau as he steals a bag of jewels first from the Russian mob, then from the Chinese gang who forced him to commit the crime in the first place. The second comes as Sammo defends the girl from the Chinese crooks as they try to kidnap her to get to Lau. The final is a tour de force as Sammo takes on the Chinese and the Russians at the film’s climax.

As round now as he is old, Sammo’s fights aren’t the astonishingly acrobatic feats of his early years, when he did things you wouldn’t believe possible for a human that fat. Nor are they even as mobile as his late career work in films like SPL or Rise of the Legend, where he trades speed and athleticism for sheer power. Aided by a convenient stab to the leg in the first sequence, thus giving narrative motivation to his immobility, Sammo mostly just stands in the middle of a room and breaks every limb that comes near him with a variety of grips and twists, the speed of which are enhanced with tricks of the camera. The comparison to The Final Master is illuminating: both films use editing and blurred motion to cover up for defects in their performers skill levels. However, where The Final Master cuts to obscure, rendering much of the apparently intricate choreography unintelligible, Sammo always makes the key motions visible, blurring or cutting out the in-between portions to emphasize the bone-crunching power of the impacts, highlighted still further by a unobtrusive X-Ray effect on the shattering extremity (a low-key version of the effect in Peter Chan’s Wuxia). The Final Master is dizzying, but Sammo makes the crowd go “whoa!”

Action aside, My Beloved Bodyguard is for mostly sentimental nonsense, densely packed with cameos from throughout Sammo’s career, from his classmates turned co-stars Yuen Biao, Yuen Wah and Yuen Qiu to the 1980s Golden Age with the wizened masters of Cinema City Tsui Hark, Dean Shek and Karl Maka to his last co-star, Eddie Peng. That it works at all is a testament to how, well, beloved Sammo is as a performer. His character has few lines: when Sammo is trying to act, he doesn’t talk very much (as in his brilliant performance in 1988’s Painted Faces). He doesn’t need to. Sammo Hung still has the most expressive eyes in the history of kung fu cinema.

2 thoughts on “SIFF 2016 Report #2: The Big Road, The Island Funeral, Heaven Can Wait, The Final Master and My Beloved Bodyguard”