The Seattle International Film Festival races into it’s third week (has it really only been fifteen days? With only a mere ten to go?) and here we have some titles you won’t want to miss. We’ll link to our reviews of the titles listed here as we write them, as we’ve been doing with our Week One and Week Two Previews. We previewed the festival back on Frances Farmer Show #6 and discussed it at its midway point on Frances Farmer #7. We’ll have a complete wrap-up of the SIFF just as soon as it ends.

Creepy – The next to latest film from Japanese director Kiyoshi Kurosawa sees him return to his unsettling early years as one of the pioneering directors of the J-Horror craze of the late nineties/early aughts. With a plot about a retired detective becoming suspicious of and investigating his suburban neighbors, I think we’re all hoping for Kurosawa’s take on The ‘Burbs.

Thithi – A comedy from South India about three generations converging on the funeral of a foul-mouthed 101 year old gentleman. The SIFF program guide compares the film to the works of the Czech New Wave, and probably not just because director Raam Reddy went to film school in Prague.

Los tallos amargos (The Bitter Stems) – A restoration project from the great Eddie Muller’s Film Noir Foundation is this Argentinian crime film from 1956. It’s playing on 35mm and Muller himself will be in attendance.

Rainbow – Nagesh Kukunoor’s tale of two kids who travel across India to meet superstar Shah Rukh Khan. Sentimental and family-friendly, too much so for our Indian cinema expert.

The 1000 Eyes of Dr. Maddin – A documentary from Yves Montmayeur about the singular Canadian director that, based on the title and its apparent style of film clips matched with talking head interviews (Isabella Rossellini, Udo Keir, etc) promises to be not nearly as formally interesting as its subjects films. But still, who doesn’t want to watch and hour of Guy Maddin clips?

Trivisa – Produced by Johnnie To for his Milkyway Image studio and a result of his Fresh Wave talent nurturing program, this three-director crime film is set during the handover of Hong Kong to China in 1997. Starring Lam Ka-tung, Richie Jen, and Jordan Chan, along with, of course, Lam Suet. Directors Frank Hui and Vicky Wong are newcomers, while the third director, Jevons Au, worked on the screenplays for To’s Don’t Go Breaking My heart  and Romancing in Thin Air and directed one of the segments of the controversyal Hong Kong award-winner Ten Years.

The Academy of Muses – Catalan director José Luis Guerín’s latest is a romantic comedy about a professor whose uses his aesthetic theories as excuses for extra-marital entanglements. Guerín is scheduled to attend the screenings of what looks to me like maybe the best European film of the festival (depending on how it stacks up to Sunset Song).

The Mobfathers – Veteran Hong Kong director Herman Yau reunites with his Ebola Syndrome and Ip Man: The Final Fight star Anthony Wong for what looks like a very violent, very funny riff on the succession struggles of a Triad, a hysterical take on Johnnie To’s Election films. 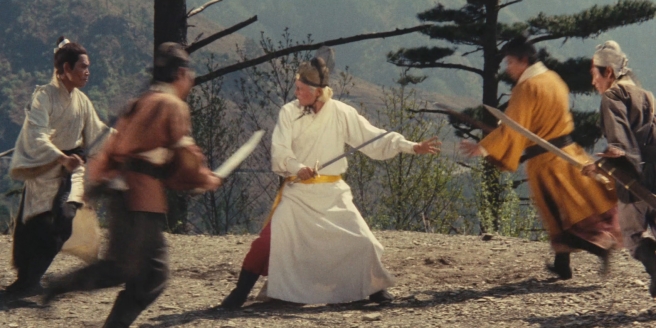 Dragon Gate Inn – The penultimate archival presentation of the festival might be the best of them (and that’s saying a lot in a festival that’s brought us both Chimes at Midnight and The General). The Platonic Ideal of the wuxia action film, King Hu’s 1967 film was his first in Taiwan and set the standard for action filmmaking for a decade. Fusing the aesthetic rhythms and archetypal approach of Sergio Leone with the innovative stunt work of the Chinese martial arts film, Hu tells the best version of the story of refugees gathering at a remote inn, only to be discovered and have to fight it out with sinister government agents. Presented in Janus Films restoration, which continues the inexplicable habit of calling the movie “Dragon Inn“. The inn is at Dragon Gate, an outpost on the frontier, that’s the whole point. It’s not an inn named after a dragon.

The Fits – This film from Anna Rose Holmer about a young girl boxer who joins a dance troupe is already generating a lot of buzz, and the trailer, if nothing else, makes it look fantastic. I’m going to have to miss it here because of scheduling, but I’m sure it’ll come back around before too long.

We Are X – A documentary about the comeback attempt of the Japaesne rock band X Japan. The SIFF’s program guide describes their style as “symphonic power-metal and innovative Visual-Kei style (which) ignited a music and fashion revolution”. Sold.

Mountains May Depart – One of the best films of 2015, featuring my pick as the Best Actress of that year, Zhao Tao. Jia Zhangke’s latest is a clean break from his minimalist roots (Platform, Xiao Wu), his most surreal melodrama yet as he traces a love triangle and a family through 15 years of Chinese history and out into a speculative Australian future.

I am Belfast – Documentarian Mark Cousins (The Story of Film: An Odyssey) explores the past and present of his hometown with the help of film clips, some friends, the landscape and Christopher Doyle.

The General – A chance to see Buster Keaton’s masterpiece on the big screen should be enticing enough, but add to the fact that this presentation also features an all new score by one of the world’s greatest composers of film music, Joe Hisaishi (best known for his collaborations with Hayao Miyazaki and Takeshi Kitano), well, you’ve got a perfect ending to the 2016 SIFF.

2 thoughts on “SIFF 2016 Preview Week Three and Beyond”