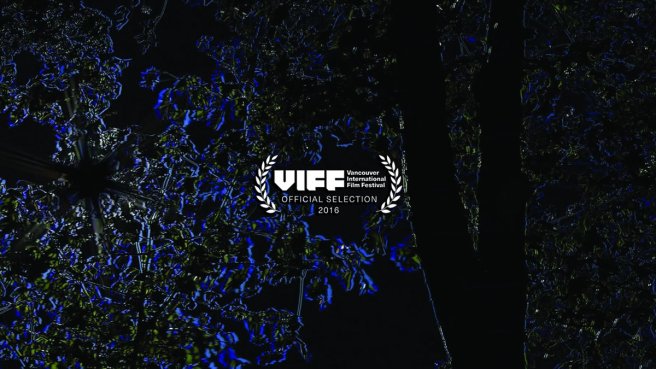 The loudest film of the Future // Present series thus far is Karl Lemieux’s film about a drummer in a noisy band (I’m at least 20 years out of date on music genres) trying to make up for the fact that he and his bandmates, in an off-screen act of stupidity, stole a bunch of pot from local gangsters and now owe several thousand dollars they don’t have and can’t raise. The drummer, Vincent, walks and drives around, drinks beer, works at his job in a factory and tries to get his brother, a meth addict with connections to the mob, to help him out. It’s all shot in black and white, with long sequences scored only by music, recalling the hallucinatory interstitial passages of Jim Jarmsuch’s Dead Man, or the desperate final third of A Spell to Ward Off the Darkness. Jean-Simon Leduc, as Vincent, dominates the film, but he’s an incongruous presence in this world. Looking a bit like George Clooney and a lot like Jordan Catalano-era Jared Leto, he’s far too pretty to be a drummer, let alone to be trapped in this dead-end life.

Paired with the feature is one of the best films of the festival so far this year, a three minute short Pop Song (a perfect title), directed by Matthew Taylor Blais. Completely silent, it’s a visual experiment wherein images are layered such that they cancel each other out, creating black spaces in the frame, and then misaligned by a frame, creating a spatial and temporal discontinuity which, with the movement of the image, reveals flashes of gorgeous bright color. Documenting a few quotidian locations: a street sign, trees in a park, a woman, we see their beauty in an entirely new way. It reminded me of Lois Patiño’s Night Without Distance and the nature footage from Godard’s Adieu au langage.