To wrap 2016 up in a neat little bow before drowning it in the river, we decided to convene a virtual round table with several Seattle Screen Scene contributors. As expected, everyone wrote way too much so this discussion will be parceled out over the course of the week.

Q: Film nerds are often looking for patterns in the chaos and the end of the year always brings out the think pieces on the cinematic themes of the last 12 months. This year was no different. Dispatches from VIFF highlighted a preponderance of poetry in film, with Paterson, Neruda, and others. Recently I liked connecting the quest for love in Knight of Cups and The Love Witch through Tarot cards. What other patterns or significant trends did you notice this year? Anything flying under the radar of the hive mind?

Ryan Swen: It’s probably unwise of me to attempt to extrapolate any sort of trend in the great films of this year, especially since I’ve only recently been paying attention to most facets of contemporary films, but I feel as if many of them were much quieter, understated affairs than usual. [Note: I have not seen Toni Erdmann.] Save for The Handmaiden, all of my top choices favor quietness and contemplation over bombast and kineticism. This is not to say that they aren’t lively in their own right–Manchester By The Sea is frequently riotously funny, Mountains May Depart has its own kind of sweeping grandeur, Creepy is absolutely spine-tingling–but the characters come first even moreso than in typical best-of-the-year fare. It is perhaps no accident that many of these films feature scenes of traveling with little dialogue, as the actors’ faces convey their emotion.

Documentaries also took a dominant position this year; it’s almost as if there was a documentary for every single different type of cinephile to put on their top-ten list. I found 13th to be thinly constructed and poorly argued, but the other four major documentaries I saw this year (Cameraperson, O.J.: Made in America, Kate Plays Christine, and Tower) were all superb and revolutionary in their own way. Each seemed to offer some sort of challenge to the conception of the documentary–even the more conservatively constructed O.J. with its massive length and even greater scope–and even more importantly contained no small amount of emotion and passion. And in a singular coincidence, the two best teen films I saw this year (Henry Gamble’s Birthday Party and The Edge of Seventeen) include scenes set in pools, in a kind of reflection of the stunning ocean/beach scenes in The Shallows and Moonlight.

Melissa Tamminga: Finding patterns and threads, always such an irresistible impulse, and something I can never quite decide about: is it delusional folly? A survival skill? A testament to our faith in the reasonableness of the universe? Whatever it is, it’s a heckuva a lot of fun as a film lover to busily organize the art I’ve consumed and, in the process, to think back over this year about what I love and hate, about what has intrigued or provoked.

Tagging on to your point about documentaries, Ryan, we might also (re)group together some significant political documentaries, docs that, perhaps, were more or less successful as films, but tap into or describe current political ideas, fears, figures in interesting ways. To 13th and O.J.: Made in America, I’d add Weiner, that humane and disturbing document of the spectacular rise and crash of Anthony Weiner in his bid for New York City mayor (and he, of course, is a figure whose indiscretions played right into the bizarre twists of this past election), and I’d also add Under the Sun, a doc I’m not sure is widely available yet, but which, with and without the permission of the North Korean government, documents the life of a young girl in the “Children’s Union” and explores the ways in which the government tries to control the narrative and the ways in which an artist can (and cannot) subvert that dominant narrative and tell another story. All four of these docs seem to me to be exploring the intersections of power and storytelling and how the story shifts, depending on the relative power of the subject and of the storyteller. Filmmakers, artists, and those who love their art have always been interested in the power of story and of perspective and in who has had the ability and power to tell those stories and present those perspectives, but it seems to me that our particular political climate has brought some of those questions to the more broadly public consciousness in unsettling and grossly caricatured ways. “Perspective” or “point of view” is conflated with “lies,” or “lies” are conflated with “point of view,” and where “fake news” is no better or no worse than “real” news, and everything seems to devolve into one post-modernist, relativistic muck, and even science and scholarship are deemed no longer trustworthy by many. I suppose the docs this year give me hope: that artists and filmmakers will continue to do what they have always done, that is, study the world around them and tell the compelling, significant stories they see there, and I believe that even the most disillusioned person cannot help but be drawn into such stories and story-telling and find, after all, that true statements about the world can be made.

On a slightly more light-hearted note, may I also point out this has been a great year for literary adaptations? Such adaptations almost never fail to disappoint me; they inevitably feel thin or too-bookish (viz. not very cinematic), but, I think my very favorite films this year so far have been beautifully cinematic adaptations: Love and Friendship (based on the Austen novella Lady Susan), Sunset Song (based on the novel by Lewis Grassic Gibbon), and Certain Women (based on short stories by Maile Meloy). Stillman, Davies, and Reichardt are, of course, all filmmakers whom I’m not sure can make a bad film, but their latest offerings, on all levels – performance, script, direction, cinematography – are a testament to why I love movies. And it’s just a delightfully satisfying bonus that the films tie into my other obsession, that is, with literature.

Is it too much of a reach to say that it’s also a year for movies with excited titles? Hail, Caesar! and Everybody Wants Some!! are yelling for us to notice them. (The latter, methinks, protests too much, but I am quite happy to give the former all of my attention.)

Evan Morgan: In his VIFF dispatches, Sean highlighted a literary thread that ran through a number of festival titles, from Pablo Larrain’s Neruda, which imagines the poet’s life as a kind of detective fan fiction, to Paterson‘s highly specific rendering of the New Jersey town as an unlikely font of artistic inspiration. But since Melissa brought up Terence Davies and his exquisite Sunset Song, it’s worth highlighting his other recent film, A Quiet Passion, which is startlingly clear-eyed about the pleasures and pains of literary life. Davies understands how solitude is both succor and sorrow for the artist, an engine for the work but also a lifelong barrier to happiness. Posterity awaits but it a will not stave off the body’s inevitable, lonely collapse. Lest it sound like a total drag, Dickinson’s unique wit suffuses the film and at its brightest moments Davies’s script delivers all the verbose delights of Stillman’s piquant dialogue. Melissa, you’ll love this movie.

Sean Gilman: To take Evan’s last point first: I agree that A Quiet Passion was made for you, Melissa. It should be for you what The Assassin was for me last year.

I do wonder if there’s something in the air with all the poetry movies this year. The three you mentioned Evan (Neruda, Paterson, A Quiet Passion), as well as Crosscurrent, which uses a found book of poems as a structuring device for a ghostly trip up the Yangtze, and Hermia & Helena, in which Matías Piñeiro again dances around adapting Shakespeare. Since the election I’ve been seeing a lot of essays about how vital poetry is to explain our contemporary moment, the ways people are seeking new (old) forms of literature to cope with a world that suddenly doesn’t seem to be what they thought it was. I think that’s a fundamentally silly premise for a think piece, but that’s standard for that most debased literary genre. And of course, all these films were conceived long before anyone knew what a Brexit was or seriously believed Donald Trump could ever win anything. And besides, it isn’t like poetry books are suddenly flying of the shelves.
But still, I’ve been reading a lot more poetry this year than ever before in my life, and I’ve just been reading more in general. I can’t say that has anything to do with the political zeitgeist, but it might have something to do with the state of cinema, or at least my relation to it. I’ve seen fewer movies this year (just over 300 as of today) than at anytime in the past decade, and when given the choice between reading and watching a movie, I’ve been picking the book. I don’t think it’s because the movies have gotten worse, in fact, I think 2016 has been a very good year for cinema, but there’s something about the cycle of the release year that’s grinding me down. The endlessness of SIFF, the summer dead zone of blockbuster season, the exhausting six months of award season, with all the inane arguments and lists and guesses that go with it. The conflation of film criticism with public relations, the endlessly repeating flagellations of the critical community, most egregiously expressed through the self-hating ouroboros called Film Twitter. The whole point, of this site, of our podcasts, of film criticism, for me has always been that it’s fun to discover new things in cinema and try and get other people to share in that fun. 2016 has mostly left me wanting to crawl into the shell of a book, where I only have to communicate with an author through words on a page, where the whole experience is contained in my own head and no one tries to make me sit in a designated reclining chair. I could, of course, abandon film criticism and film twitter and just spend my time reading books. No one’s forcing me to watch movies. But after awhile I’d probably try to start talking to people about what I’ve been reading and eventually I’d be writing literary criticism and be part of book twitter and I bet that’s even more insufferable (and my God if the anguished whining about Bob Dylan winning the Nobel are any indication, those people really are awful).
I’d add one documentary in particular to the set Ryan proposed, and that’s Adam Curtis’s Hypernormalisation. It’s not Curtis’s best film, and in a lot of ways the seams in his approach to historical analysis are beginning to show, but I’ll say this: all year I was convinced there was no way Donald Trump could be elected president. But after I saw Hypernormalisation, I was pretty sure he was going to win. 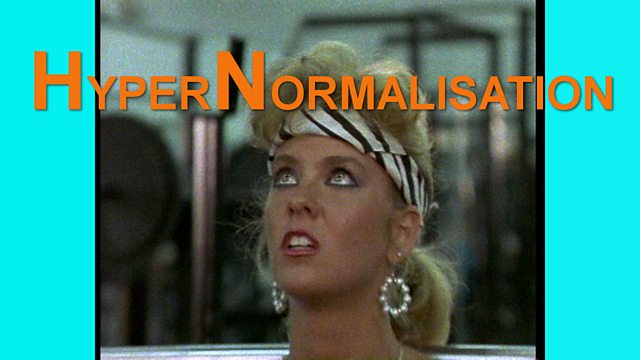