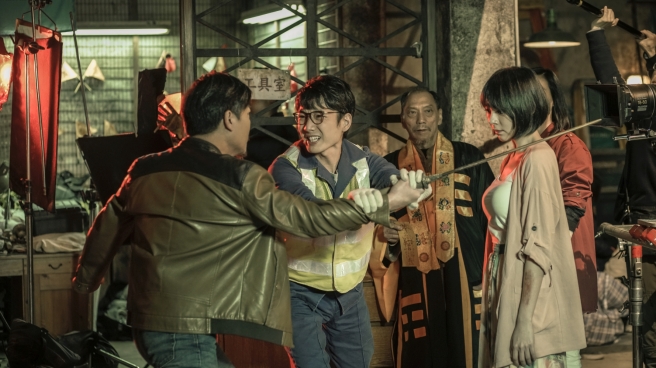 In loving homage to classic 1980s Hong Kong vampire films like Sammo Hung’s Encounters of the Spooky Kind, The Dead and the Deadly and the Mr. Vampire series, first-time directors Yan and Chiu have built an effects heavy update of the old lore: the vampires still hop and are still immobilized by Taoist amulets (pieces of yellow paper with magic characters written on them) but they also vaporize when stabbed by wooden swords. Babyjohn Choi plays a young man who joins the eponymous department led by none other than comedy legend Richard Ng, Chin Siu-ho (one of the students in the original Mr. Vampire) and Yeun Cheung-yan (one of Yuen Woo-ping’s younger brothers). But rather than merely update the old formula with new effects, along the lines of last year’s Ghostbusters remake, the film instead becomes a cute romance, as Babyjohn accidentally turns a pretty vampire girl almost human. Lin Min-chen, a Malaysian actress whose previous credits amount to eleven episodes of the Taiwanese TV series Prince of Wolf and being a “Instagram sensation. . . known for her angelic face and killer body”, plays the vampire girl in a performance that owes at least a little bit to Bae Doona’s work in Kore-eda Hirokazu’s Air Doll. She can’t talk, or walk, or go out in the sunlight, but she’s got big eyes. The romance such as it is, is the nicest thing in the film, and there are some other funny moments, but despite the local pedigree in genre and in the veteran talent on-screen feels weirdly unrooted, like so many Hong Kong films trying to appeal to audiences outside the (former) colony. There’s a training montage joke, but rather than reference local films, it calls back to Rocky and The Karate Kid. There’s a subplot about a rival government organization, but it’s totally undeveloped, perhaps because of the political implications of a local group being forced to submit to the rigid amoral hierarchy of a bureaucratic power. So rather than make something specific, Yan and Chiu opt for the blandly general. Those 80s films, especially Sammo Hung’s, had a real misanthropic bleakness to them, a sense of horror as much existential as violent. There’s none of that here, only cuteness.