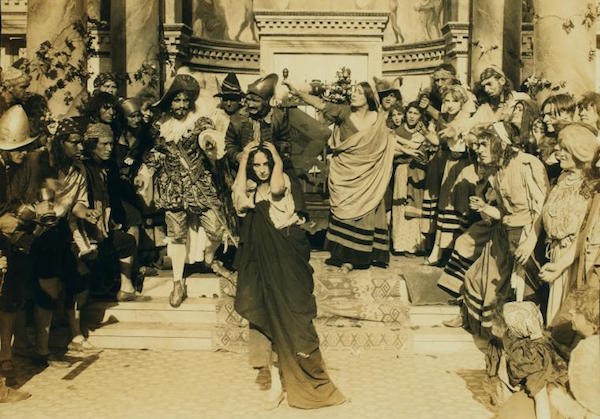 In her excellent history entitled Women Filmmakers in Early Hollywood, film scholar Karen Ward Mahar presents a startling fact, unknown to many of even the most avid cinephiles today: in the 1910s and early 1920s, close to half of the people working in the film industry were women. Women worked not just in the capacities that one might expect—as actresses, assistants, makeup artists, and wardrobe designers—but also as writers, producers, editors, and, crucially, directors. Once movies became what Mahar calls a “Wall-Street defined, vertically integrated big business,” however, directing opportunities for women swiftly began to vanish, leaving only a tiny number of American women working as directors from the late 1920s through the 1960s. (Even now, the Directors Guild of America estimates that only 15% of the directors working in Hollywood today are women.) The prospects for women filmmakers by the end of the 1920s were so bleak, in fact, that one of the most prolific and influential directors of her time, Lois Weber, advised young women seeking to break into directing, “Don’t try it; you’ll never get away with it.”

Though some women did “get away with it,” none enjoyed as much popular success as Weber until our own century. Weber is best known for her high-minded social problem films during the “uplift” period of film history. Her projects considered such topics as birth control (Where Are My Children?), capital punishment (The People vs. John Doe), and income inequality (The Blot). Uplift films, however, were far from her only métier; she also directed white-knuckle thrillers (Suspense), comedies (Discontent), and quasi-historical epics. The last category is represented gorgeously in the recently restored The Dumb Girl of Portici. Based on an opera, the film stars the great ballerina Anna Pavlova as Fenella, a young mute girl tragically swept up in a violent revolution. Pavlova’s extraordinarily expressive performance is the centerpiece of this lavish adaptation, but there’s quite a bit more to commend. Opulent sets, stunning costumes, lively ensemble performances, and inventive special effects make this film a genuine pleasure to watch.

END_OF_DOCUMENT_TOKEN_TO_BE_REPLACED

Shaun the Sheep Movie at the Grand Cinema

It’s a weird week for me to pick a Featured Film because I haven’t seen any of the coolest looking titles of the week: the Northwest Film Forum’s one night only screening of Khalik Allah’s latest film, Black Mother, with the director in attendance; a revival of Smokey and the Bandit in memory of the late, great Burt Reynolds playing at various multiplexes across town; Hélène Cattet & Bruno Forzani’s Let the Corpses Tan at the Grand Illusion; Lois Weber’s restored silent The Dumb Girl of Portici; the latest from Indian auteur Anurag Kashyap, Manmarziyan, playing exclusively at the Lincoln Square; or Frank Perry’s The Swimmer, part of the NWFF’s 1968 series. But since my daughter turns 7 years old this week, I’ll go with one of her favorite movies, the free screening of the Shaun the Sheep Movie, playing Saturday morning only at the Grand in Tacoma. Her Shaun the Sheep, glued to her side since she saw the movie, her first ever trip to a theatre, back in 2015, is pictured above.

I am Not a Witch (Rungano Nyoni) Fri-Thurs
The Peacemaker (James Demo) Fri-Sun
The Swimmer (Frank Perry, 1968) Sat Only
Black Mother (Khalik Allah) Thurs Only Director in Attendance

A Whale of a Tale (Megumi Sasaki) Fri-Sun