We here at Seattle Screen Scene are very much looking forward to once again covering the Vancouver International Film Festival this year. It’s shaping up to be a pretty strong festival, with a number of titles we can’t wait to catch. We’ve already seen a few of the movies playing this year, though, as we covered them at festivals earlier this year. Here is a compendium of links to our previously published reviews of VIFF films that played at the Toronto Film Festival and the New York Asian Film Festival. 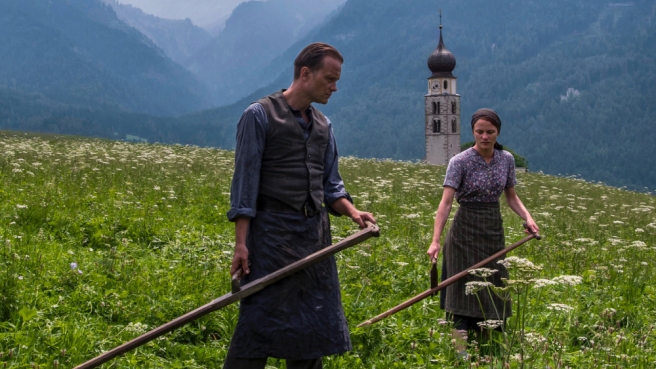 Blood Quantum (Jeff Barnaby) – Evan in the Georgia Straight: “TIFF kicked off for me with the First Nations zombie movie Blood Quantum, but the moment that I walked out of the theater, I ejected it from my consciousness like a spent shotgun cartridge (though one dumbfounding line—delivered with perfect seriousness—will rent a room in my memory palace for eternity: “They look at me like my vagina is Pandora’s box!”)”

Hard-Core (Nobuhiro Yamashita) – The latest from the director of Linda Linda Linda, one of the great films of the century thus far, was a disappointment for Sean, who wrote at the Notebook that, “Hard-Core is simply lost in itself, its collection of losers as charmless and uninteresting as the film’s forced whimsicality.”

A Hidden Life – (Terrence Malick) – Lawrence at InReview Online notes that Malick’s latest is a “vision of breathtaking natural expanses and solid manmade enclosures [which] remains every bit as formally radical as any of his films this decade.” While Evan is very much looking forward to seeing it again, as he wrote for the Georgia Straight that while he was initially disappointed, he “sat down for the next film, the lights dimmed, and then, suddenly, they came back up. How long had I been here? Sometimes, at a festival, a movie gets sacrificed on the pyre when the film that precedes it sparks something in the soul. Turns out I spent two hours replaying A Hidden Life in my head—everything else passed by in a blur. Sorry Beanpole [also playing VIFF], Terrence Malick set my mind on fire.”

It Must Be Heaven – (Elia Suleiman) – Evan was not a fan of Suleiman’s latest, noting at InReview Online that, “Suleiman possesses maybe two or three visual ideas, though he strongly prefers one: sometimes things over here look like things over there. Because warmed-over humanism is his chosen mode, his facile symmetries are meant to reinforce — as the press notes say — the “unexpected parallels” that he discovers while travelling the globe. They’re also meant to be funny. That they fail as comedy is perhaps forgivable. That they turn disparate places and people into easily readable mirror images, which provide us the comfort of the familiar only because they reflect back a portrait of ourselves, is more worthy of condemnation.”

Krabi, 2562 – (Anocha Suwichakornpong & Ben Rivers) – At Reverse Shot, Lawrence writes that Suwichakornpong & Rivers’s collaboration “present[s] the viewer with sundry moving parts buttressed by fulsome textural detail and all manner of disorienting edits. If the pieces don’t quite fit together by the end, linked somewhat arbitrarily by the film’s temporal flattening—the entirety of the Holocene is folded into the present, 2562 being the current year of the Thai Buddhist calendar—that irresolvability is at least part of the point”

Marriage Story (Noah Baumbach) – At InReview Online, Lawrence sees the risk-averse Baumbach attempting a bit more formal experimentation, such that his new movie “might eventually come to feel like a transitional work within his filmography.” As an example: “Baumbach sets up the formal template of the film, which introduces exaggerated, even caricatured types, then offers sundry details to modulate or even overturn the typification — which is also to say the opposite of what goes on during divorce proceedings, where small slippages are turned into deadly character flaws.”

Parasite (Bong Joon-ho) – In the Georgia Straight, Evan writes that Bong’s “images possess the graphic panache and pith of a comic book panel, and in Parasite, he tosses them off with characteristic ease. But as Bong bulks up his visual prowess with each new film, his characterological muscle only atrophies further. We’ve reached an unhealthy point: the internal and external stimuli that motivate his people are now second order concerns at best, always subordinate to the next punchy composition.”

Portrait of a Lady on Fire (Cèline Sciamma) – Writing in the Georgia Straight, Evan was not a fan of Sciamma’s “finicky attention to candlelight and 18th century domestic fripperies [which] can’t hide the fact that Portrait of a Lady on Fire actually takes place in the present. And like any ready-made facsimile, the historical varnish is merely a concession to bourgeois tastes, a decorative contrivance, and therefore entirely dishonest.”

Synonyms (Nadav Lapid) – Evan in the Georgia Straight: “Lapid sees a neat correlation between his behaviorist approach to character—which abstracts human behavior into a series of violent tics—and the unstable psychogeography of Israeli selfhood. It’s unclear, however, that his style alone is sufficient to explicate his subject, at least to anyone living outside the confines of Nadav Lapid’s skittish mind—which is to say, the rest of us.”

The Twentieth Century (Matthew Rankin) – At InReview Online, Lawrence notes that while “Comparisons to fellow Winnipeg filmmaker Guy Maddin are inevitable, as both share an evident interest in lost and/or defunct film forms, artificial staging, and wild humor.” But, “the difference seems to be that the incongruous, borderline surreal turns of Maddin’s singularly fecund oeuvre feel touched by genuine madness, whereas Rankin’s film registers as merely mannered.”

Vitalina Varela (Pedro Costa) – Evan is conflicted on Costa’s latest, noting in the Georgia Straight that while “his images are as striking as any in contemporary cinema; they are incredible things to witness on a movie screen” but that “it also raises a question that both Costa and his fans are intent on avoiding. If Vitalina Varela truly belongs to the woman at its center, who lends the film her name and her life story, shouldn’t Costa bend his style around her?”

White Lie (Calvin Thomas & Yonah Lewis) – At InReview Online, Sean wrote that this Canadian indie from the team that brought Spice It Up to last year’s VIFF, about a woman pretending to have cancer is “like a straight version of a Seinfeld episode, with Katie (Kacey Rohl) as the Costanza at the center of it all, barely afloat atop a sea of deceit.”

White Snake (Amp Wong & Ji Zhao) – Reviewing this Chinese animated fantasy at the Mubi Notebook, Sean wrote that “aside from showing a bit too much skin and having a decided lack of songs, White Snake might as well be a Disney product.” But also, “it’s standard fairy tale romance stuff, but done with enough verve and belief that old clichés can be forgiven. It’s not Tsui Hark, but it might be a kids version of House of Flying Daggers.”

The Wild Goose Lake (Diao Yinan) – Evan was mixed on the latest from the director of Black Coal, Thin Ice, writing in the Georgia Straight that, “the eccentric mise-en-scène scrambles important plot information just as often as it transmits it with ingenuity. In other words, Diao is a less sophisticated storyteller than he is a stylist, and the narrative convolutions eventually throw a wrench in things. The film breaks down as it approaches its end, and the final beat, which should register with the emphatic force of a full stop, instead trails off like an ellipsis.”