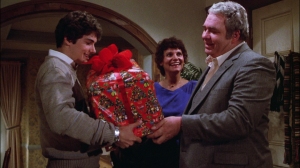 It all started with a little trouble in Chinatown. There a young boy said, “I told you everything was real”. That’s important. Christmas is closing in and a kind-hearted father is looking for the perfect gift for his son. In a basement junk shop he spies a creature that sounds like Howie Mandel. Like any sane person he feels compelled to adopt this “mogwai”. Then all hell breaks loose. Tying together strands of The Twilight Zone, the boomer ascendency, and the dominant milieu of executive producer Steven Spielberg, Joe Dante’s Gremlins transcends them all to become a masterpiece of mayhem. 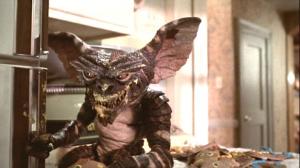 The film takes its fair time establishing the world of Kingston Falls, a portrait of idyllic small town America with its loving families, alcoholic sheriff, and sinister landowner. All of this set-up is important and much of its success must be credited to a young screenwriter named Chris Columbus. There is a reason most of the comic moments of misbehaving inventions take place in the kitchen. This care to world-building is imperative since the whole second half of Gremlins is about world-destroying. The later scenes of gremlins terrorizing the town are some of the best examples of pure cinema and are where Joe Dante’s infectious gee-whiz kid id comes out to play. There is no forward momentum in these moments, just an anarchic grab bag of visual gags and goofy genre pastiches. It is puppets acting out a noir for a minute, then croaking their way through a Christmas carol the next. These glimpses of insanity become the bulk that will overrun the film’s joyous sequel. But here in the original, the storyline is so finely calibrated by this point that we don’t even realize there is no more story to tell. Nor do we care.

As in every Joe Dante production, Gremlins is suffused with a pathological obsession with cinema. It’s not just the Road Warrior posters and cameos of Spielberg, Chuck Jones, and Robby the Robot. Movie culture permeates every facet of the film. It’s the fact that Robby the Robot bothers to quote lines verbatim from Forbidden Planet. It’s the sinister Mrs. Deagle channeling Margaret Hamilton by calling for the head of Billy’s dog Barney as if he were Toto and this were Kansas. It’s the frequent appearance of other films often used to foreshadow events, such as Kevin McCarthy shouting about alien arrival in Invasion of the Body Snatchers as the mogwai incubate in their putrid pupal stage.

And of course, it has to be movies that are the gremlins’ downfall. Mesmerized as we all are by the majesty of Walt Disney’s Snow White and the Seven Dwarfs, the gremlins don’t even realize that they have become trapped in a theatre-cum-timebomb. (Also, pause for a moment and relish the fact that Disney allowed the use of their signature animated feature as punctuation in a scene of unrepentant genocide. This would certainly not be possible today.) Unlike many current films, including Chris Columbus’s latest directorial effort, Pixels, that populate themselves with nostalgia at the expense of creating their own magic, Gremlins has unequivocally become its own unique classic. The film is now a reference point when we watch the vengeful finale of Inglorious Basterds or are reminded of Billy’s mom and her brutal kitchen slayings while watching Doctor Octopus wreak havoc in Spider-Man 2.