First-time director Kim Gwangtae delivers a fresh take on the “Pied Piper of Hamelin” with his visceral film The Piper. Set in the hinterlands of Korea in the war-torn 1950s, the film begins with a devoted father and son traversing the country in hopes of finding a cure for the boy’s tuberculosis. The pair (played wonderfully by Ryu Seungryong and the absolutely adorable Goo Seunghyeon) stumble upon a hidden village that knows no news of the outside world and eyes their new arrivals with unease. In an effort to ingratiate themselves with the locals, the father offers to rid the town of their rampant rat infestation.

In the early going, The Piper plays it light with goofy antics and the building of a budding romance. But like the smoke used to run out the rats, darkness creeps through the narrative’s cracks long before the fatal finale. And by its conclusion, The Piper has become a gruesome tale of vengeance that would make Park Chanwook or Quentin Tarantino proud. There will be blood. And there will be rats feasting on it.

Contemporary American takes on fairy tales, in particular the recent crop of live action Disney films, decide to pad running times by injecting narratives with leaden backstory and giving the characters — gulp — origin stories. Kim has no choice but to add similar elements to his film. If not, the movie would be about ten minutes long. However, the production manages to sidestep a lot of the inherent pitfalls that plague homogenized Hollywood.

For one, the motivations and shared history among The Piper‘s characters is teased out in bits and pieces, all of these tantalizing little mysteries being resolved while pushing the narrative along. Secondly, the history baked into this version of the tale is specific enough to its time and place that it distinguishes it from the generic story. It makes The Piper something new. And while there is certainly much to chew on in terms of the choice to set the film in a Korea devastated by war, the allegories contained within could apply to any community run on fear and lies. 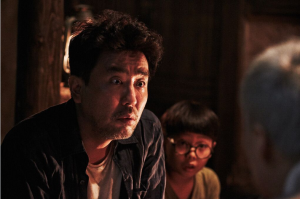 Kim Gwangtae makes a few decisions that give The Piper the hallmarks of a debut feature. The rhythms in the first portion seem a little too hectic, traveling on cuts that come a moment too soon or jump forward too aggressively. The film’s emotional climax overstays its welcome a little bit by including a treacly flashback to good days and lives gone by. But those “problems” are of little concern. The commitment to the endgame, the firm declaration to go big on this beautiful, dark, twisted fantasy is what makes it so exhilarating. The Piper doesn’t court restraint.