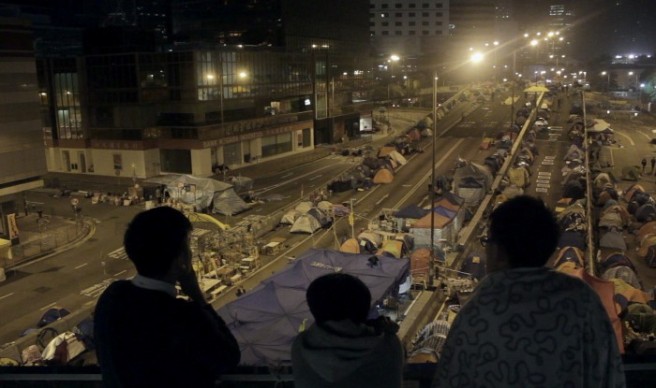 As a documentary about the 2014 Umbrella Movement, in which thousands of young Hong Kongers gathered to Occupy districts throughout the city in protest of the PRC’s decision to not allow the former colony to directly choose its candidates for high office, Yellowing is something remarkable in our time: an honest direct cinema film, with nary a hint of meta-commentary about film theory or storytelling. Not that there’s anything wrong with the doc/fiction hybrids that have become so ubiquitous lately, there’s just something refreshing about the open earnestness of the filmmaking here, mirroring a little bit the idealism of the young people at its center. Shortly after the Hong Kong police attacked protesters with tear gas on September 27, 2014, Chan began filming the students as they set-up in and occupied the Admiralty and Mongkok neighborhoods. He focuses on a few young people through the run of the 67 day occupation: a man nicknamed Lucky Egg who gives impromptu lectures in English and political philosophy; a young man who works in construction who wanders in and out of the protests–something big always seems to happen when he’s there; a law and literature student named Rachel who makes announcements in three languages and provides the film’s eloquent final statement, an open letter to a professor who had infuriatingly denounced the students’ idealism. 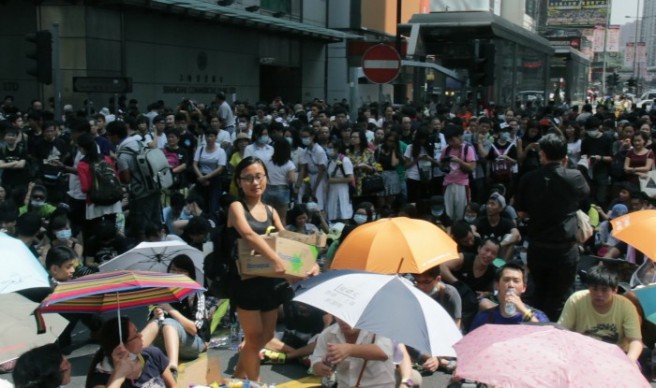 In focusing on the details of the occupation, recording the quotidian requirements of activism (building rain-proof shelters, finding a mattress to sleep on, distributing water, masks and umbrellas to counter gas attacks), as well as the ideological arguments the protestors are making (they want to be able to vote for their leaders, this is anathema to a paranoid one-party state), Chan’s film resembles no less than Peter Watkins’s La Commune (Paris 1871), one of the great films of this century. The similarities between the protestors then and now is striking, but Watkins’s film, being nearly six hours long, takes a couple of meta-fictional turns in its historical reenactments (for instance: the film’s actors discuss the issues the Communards raised in character, and also as themselves, expressing how the process of playing 150 year old activists affected the way they see politics in their own time). Chan has no need of such artifice: his movie isn’t a reenactment, and we see the impact the process has on his subjects unfolding as it actually happened. Beyond that, we get a feel for both the city itself and the young people not leading, but forming the heart of the movement. Whether discussing the nuts and bolts of activism and its limits (most of them know very well they cannot succeed, but they’re there anyway; Rachel distributes yellow wristbands sporting the slogan “They Can’t Kill Us All”), or just hanging around trying (and failing) to meet girls (“you need guts and brains to get a girl”). In its ground-floor, first-person perspective, it finds more honesty and wisdom and life than a hundred Hollywood issue-advocacy films.