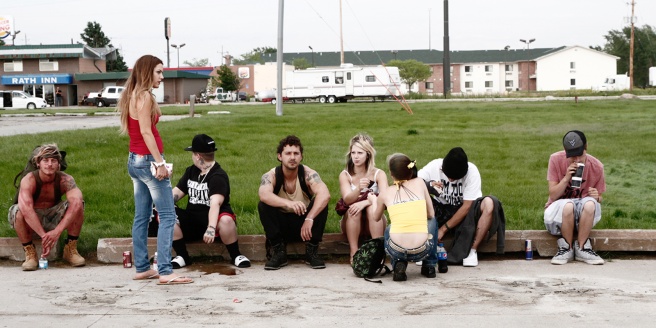 American Honey finds British filmmaker Andrea Arnold roughing it with the impoverished class of 21st century America, imagining life at the lower-rungs as a procession of scams and brutal poetry, strip malls and butterflies, and insisting with all of her not inconsiderable filmmaking power that this world and its inhabitants are worth taking seriously. Or, to summon up a different vision of American poverty: “Attention must be paid.” An admirable goal to be sure, but urgency and good intentions do not a movie make. Arnold bets the house on the compassion borne from her closely-hewn style, which locks into the perspective of Star, a young woman running from a broken home and towards her meager dreams, via a tight Academy ratio frame and shallow-focus close ups. This closeness ensures that no matter how flagrantly grating the behavior gets—and whoo-boy does it grate—our complicity with the events on screen remains intact. It’s shorthand for empathy; a stylistic shortcut particularly common to the aesthetic Arnold adopts, which she employs unceasingly over the film’s extended running time. Realism shouts and spits in your face, apparently. And with so many moments constructed to put the audience in a confrontational position (either step up or step out), it’s worth asking: when does a repeated plea for empathy become a form of condescension? Tell us over and over again that these caricatures are worth taking seriously as people and I might wonder if you yourself have some doubts.

The metaphoric weight that burdens Arnold’s characters doesn’t help humanize them either. They all form a piece of some warped corporate structure. Jake (a never rattier Shia LaBeouf) indoctrinates Star into the business of peripatetic magazine hucksterism with the slogans and petty hypocrisies of middle management. He reports to chief executive Crystal, who runs the outfit perched from on high (she gets her own motel room). Star is, of course, the poor entry-level employee hoping to eek out a living. These aren’t really people, simply 21st century workplace archetypes grafted onto the landscape of Southern poverty. Perhaps that’s not exactly condemnable on its face, but “corporatist avarice affects the poor too!” proves an unsustainably thin insight at three hours.

Andrea Arnold’s literalism extends to the soundtrack too, which manages to pair each song choice with the most obvious accompanying image conceivable. “We Found Love” as Star and Jake meet cute in a “hopeless place” (it’s a K Mart). Or Bruce Springsteen’s rendition of “Dream Baby Dream” for a heart to heart on, well, dreams. To be fair, Arnold does understand how young people define themselves and bond over music, and the soundtrack’s central place in the structure of the film reveals more about these people than any of the execrable dialogue can manage. On the other hand, Arnold never really probes what it means for a band of young white Southerners to live according to the rhythms of predominately black music.

A late film, late night drive into glowing oil fields captures some of the beauty and menace crucially missing from the rest of the film. Sexual threat and furtive tenderness dance perilously close in this sequence, which captures something like the apocalyptic longing of the Boss’s music, an obvious spiritual antecedent for Arnold’s film. If only she had absorbed the deeper lessons of Springsteen’s art—the show-don’t-tell storytelling and the unforced dignity of his characterizations—Arnold might’ve discovered the empathy she seeks. Instead, we get Crystal’s sales advice: “I want you to dress like dirty white trash and they’ll pity you.” American Honey‘s problems don’t get much clearer than that.

View all posts by Evan Morgan